The main driver of business events to the state, BCEC is looking at strong future growth with 1,357 future bookings right through to the year 2029 bringing more than 900,000 guests and an added economic value of $1 billion.

The highly awarded Convention Centre which has been named among the world’s top three convention centres on three separate occasions also delivers one of Australia’s most successful Advocates program, the BCEC Convention Advocates Partnership.

This eminent group of influencers who count among their members some of Australia’s top scientists, researchers, business leaders and innovators work with BCEC to put Brisbane’s science and innovation excellence on the global agenda.

Coinciding with the Centre’s 21st anniversary it was announced that a record 20 Advocate assisted conferences were secured in the last 12 months, taking the total number of confirmed conferences with advocate involvement to 71, delivering a combined economic benefit to Brisbane and Queensland of $90.7 million and the sharing of knowledge wealth across key scientific and research sectors that could ultimately change lives.

The Centre celebrated its 21st anniversary week doing what they do best, hosting 37 events including two conventions and 20 corporate meetings, 14 corporate functions and a public exhibition.

Headlining the week’s conference agenda was the APPEA 2016 Conference and Exhibition, the largest annual upstream oil and gas event in the southern hemisphere, at the Centre for the fourth time bringing with it more than 2,200 attendees.

Considered ‘the event’ for the energy industry bringing together the whole of the sector, the APPEA 2016 Conference delivered plenary and concurrent presentations covering a wide range of energy, policy and industry issues. The global energy landscape and state of the market both featured on the main agenda for discussion. An integral component of the conference is always the exhibition which this year featured more than 155 exhibitors displaying the latest technologies and the newest advances in the oil and gas industry.

The event featured federal and state government ministers as well as influential experts and industry leaders sharing their expertise and ideas.

General Manager of the AEG Ogden operated BCEC, Bob O’Keeffe said it was a privilege to be able to share the Centre’s birthday with such a long standing and valued client as APPEA whose sector is so important to the Queensland economy.

“This event attracts the top performers of the energy sector from all over the country and across the globe delivering more than 7,000 room nights to Brisbane hotels and showcasing Brisbane as a leading business events destination.” 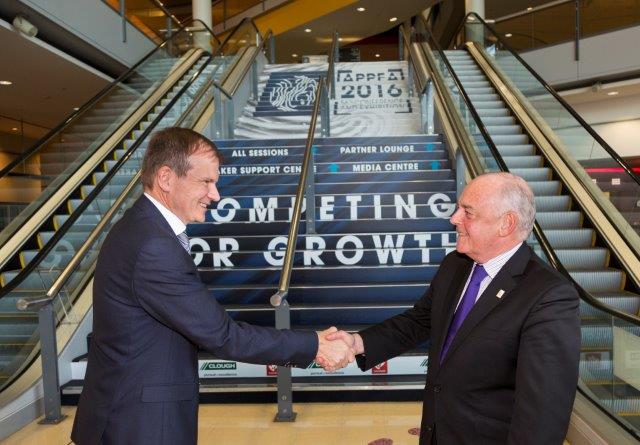