Since opening in 1995, the Brisbane Convention & Exhibition Centre has showcased the talent of Australia’s leading Indigenous and non-Indigenous contemporary artists.  Comprising more than 50 works including paintings, works on paper, sculptures and site-specific installations, the BCEC Art Collection tells the dynamic and diverse story of visual arts practice in Australia from the 1980s through to today.

BCEC is the only convention centre in Australia with a dedicated and permanent art gallery space.  The Plaza Gallery is home to one of the most significant collections of Central Desert Art, a legacy of Expo’88.

The Centre makes its Art Collection accessible to visitors and members of the public as part of its long term commitment to showcasing and supporting contemporary Indigenous and non-Indigenous Australian Art. 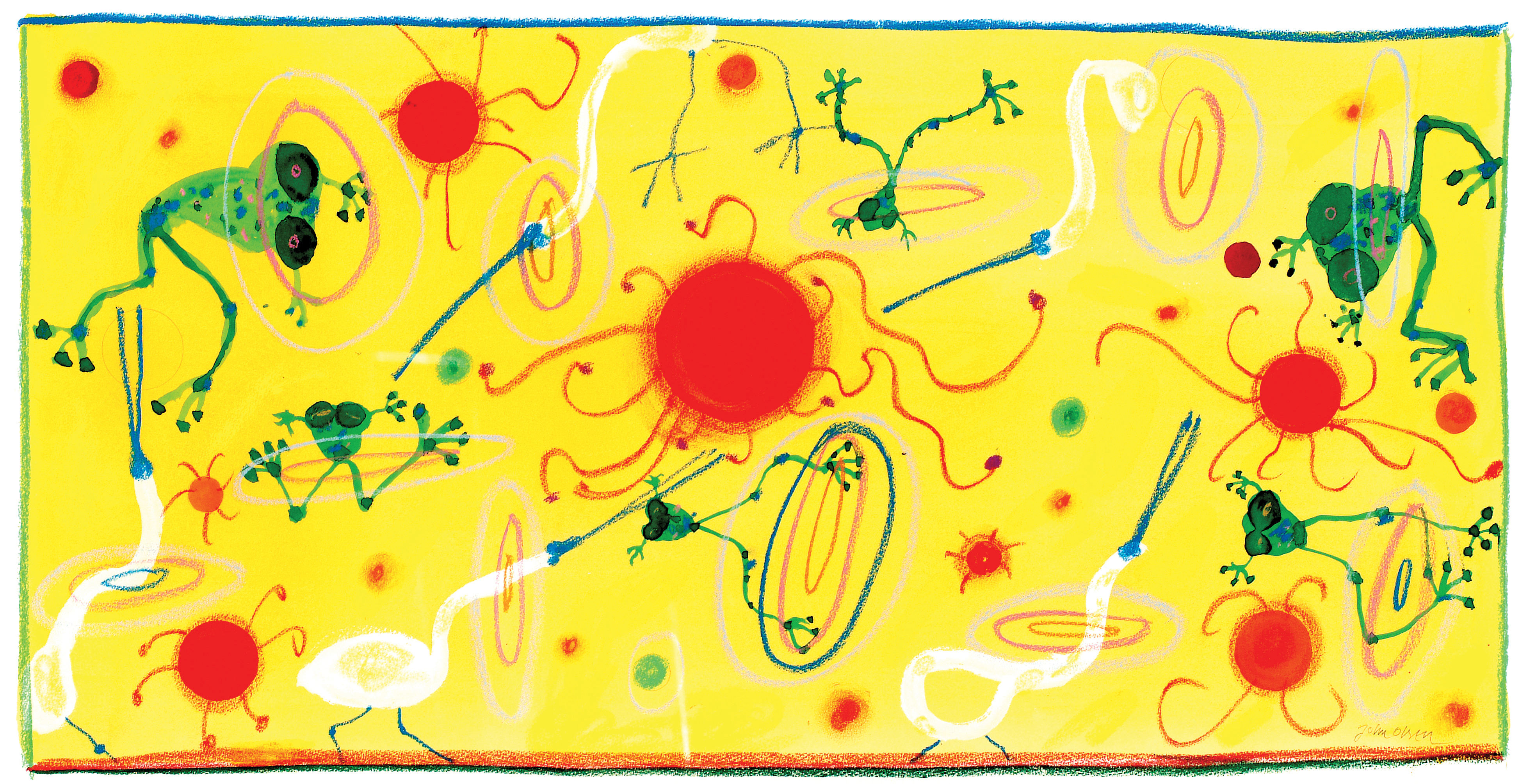 The spectacular images and bold colours of one of Australia’s most significant and accomplished artists, John Olsen, have been adapted onto the terrazzo floor of the Centre’s foyer from his painting ‘Queensland Lily Pond’.

The Olsen work, in its predominant position in the Centre’s main entrance, has become acknowledged as an integral component of the Centre’s signature and an appropriate recognition of the Centre’s collection of important works.

The Centre takes pride in furthering and promoting interest in Australian Indigenous art and from its earliest days has built one of the most significant collections of Central Desert Art. This museum quality collection of Indigenous art is currently on display in the Centre’s permanent art space – the Plaza Gallery.

Read more about the collection and view gallery →

Brisbane Convention & Exhibition Centre’s signature gala event space – the Plaza Ballroom – home to the majority of Brisbane’s premier gala and celebrity events, now proudly showcases what is perhaps the largest artwork on display in Australia. A painting by the highly regarded Aboriginal artist, Dorothy Napangardi, has been reproduced on to the Ballroom’s new carpet to great effect.

Brisbane Artist Bruce Reynolds was commissioned to complete artworks for BCEC on Grey Street.  “Art and Place” comprises 5 paintings, 16 wall panels and 6 sculptures.  He makes pictorial objects from linoleum, paint and photography as well as architecturally integrated relief work in concrete and Axminster carpet. Through the use of such materials he pursues his interest in relationships between pattern, history and the built environment.

The paintings in this gallery were originally commissioned for display at the 1988 World Expo in Brisbane. They represent a style of Aboriginal painting that emerged from one of the most remarkable developments in 20th century art. In the early 1970s, 250 kilometres west of Alice Springs at the Aboriginal settlement of Papunya, artists began to paint their traditional designs using modern art materials.

Over 20 artists were in this first group of Papunya painters, nearly half of whom are represented in the Brisbane Convention & Exhibition Centre Indigenous Art Collection. The collection includes paintings by Kaapa Tjampitjinpa, Clifford Possum Tjapaltjarri and Johnny Warangula Tjupurrula, who are now seen as key figures in the history of Australian art. The art of the Australian desert is now recognised and collected all over the world.

The subjects of the paintings are closely associated with the identity of the painter. Artists often say they are painting ‘my story’, meaning that they are depicting events, places, animals or plants with which they believe their identity to be strongly connected. In the English language the word ‘dreaming’ is often used to refer to these stories. The term reflects Aboriginal belief that the past is eternally present.

Many of the symbols used in desert art are described as secret-sacred because they have a religious significance that restricts their display. To prevent them from being seen by people who have not been initiated into ceremonial practice, some details are excluded from paintings or are camouflaged by a background pattern of dots. As a result, non-Aboriginal observers often refer to this style of desert art as ‘dot-painting’.

The art movement spread rapidly through desert settlements. Art production generates a substantial income for these communities. Within ten years, people who had been removed from their lands to form the settlement at Papunya had earned enough money to found their own community in their own part of the country.

The most prominent Aboriginal and Torres Strait Islander artists are now among the leading figures in Australian art. This has occurred not only in remote communities where people have retained many aspects of their ancient traditional way of life, but also in cities where urban indigenous artists are active participants in contemporary global culture. All these developments can be traced back to the appearance of the style of painting represented in this gallery.

– Timothy Morrell
Timothy Morrell is an independent curator and writer who was formerly Curator of Contemporary Australian Art at the Queensland Art Gallery.

HISTORY OF THE COLLECTION

John Truscott, the Creative Director of the 1988 World Expo in Brisbane, originally proposed the idea of commissioning paintings by Aboriginal artists from the central desert for an Expo display at South Bank. The 27 paintings were assembled in 1987. They were installed as part of the Expo Authority’s own pavilion and were displayed outdoors, under protective sails, in a spiral arrangement devised by Truscott. The collection was called The Art of Central Australia.

The Brisbane art dealer Philip Bacon wrote that this group of paintings was ‘…one of the most acclaimed exhibits at Expo, and received a vast amount of publicity… particularly overseas…The artists represented are considered by the experts to be the greatest of this famous school…The value of this collection lies in its very composition, and in its completeness.’

The paintings became the property of the South Bank Corporation (the reconstituted Expo Authority) after the conclusion of Expo. The possibility of selling the paintings was already being explored soon after they were commissioned. In a letter to New York art dealer John Weber dated 28 March 1988, John Truscott wrote ‘We are not interested in selling the works as individual pieces, but only as a collection in its entirety.’

Philip Bacon Galleries stored the paintings, rolled up, from 1988-1993.

It was finally decided to use the collection in the then new Brisbane Convention & Exhibition Centre.’ In March-April 1995, in preparation for display, the paintings were cleaned, conserved and re-stretched ready for hanging.

A painting by the highly regarded Aboriginal artist, Dorothy Napangardi, has been reproduced on to the Ballroom’s new carpet to great effect.

The painting, ‘Sandhills’ was purchased by the Convention Centre from the artist with her blessing for the specific purpose of recreating the artwork on carpet, giving thousands of international and national delegates the opportunity to experience the acknowledged spiritual beauty of Central Desert Art.

The Centre’s Director of Operations, Geoff Hanrahan worked with local designer Carly Perkins to create this spectacular example of carpet art which now adorns 2,000 square metres of the ballroom floor.

‘Sandhills’ portrays the journey of ancestral women to the sacred salt site of Mina Mina, in remote Northern Territory, their home and birthplace of the traditional Indigenous digging stick.

The Centre takes pride in furthering and promoting interest in Australian Indigenous art and from its earliest days has built one of the most significant collections of Central Desert Art. This museum quality collection of Indigenous art is currently on display in the Centre’s permanent art space – the Plaza Gallery.

Brisbane Artist Bruce Reynolds was commissioned to complete artworks for BCEC on Grey Street. “Art and Place” comprises 5 paintings, 16 wall panels and 6 sculptures. He makes pictorial objects from linoleum, paint and photography as well as architecturally integrated relief work in concrete and Axminster carpet. Through the use of such materials he pursues his interest in relationships between pattern, history and the built environment

The Grey Street Ground Floor Foyer, provides the main showcase for his art works, Pamphlet, a work of three components over different media.

“The architectural design is a unifying force for the art work with the building providing an ideal setting and creating a moment where architect and artist come together.”

The work is named after Thomas Pamphlet, a convict and castaway who was marooned in Moreton Bay and who led John Oxley to the Brisbane River. In his work, which he describes as ‘ambitious’, Bruce Reynolds draws together the elements of the early settlement of the Brisbane River, the landscape, trade, industry and the current usage of the BCEC on Grey Street site. His ‘Gem’ installations also feature images of South Bank during the 2011 flood.